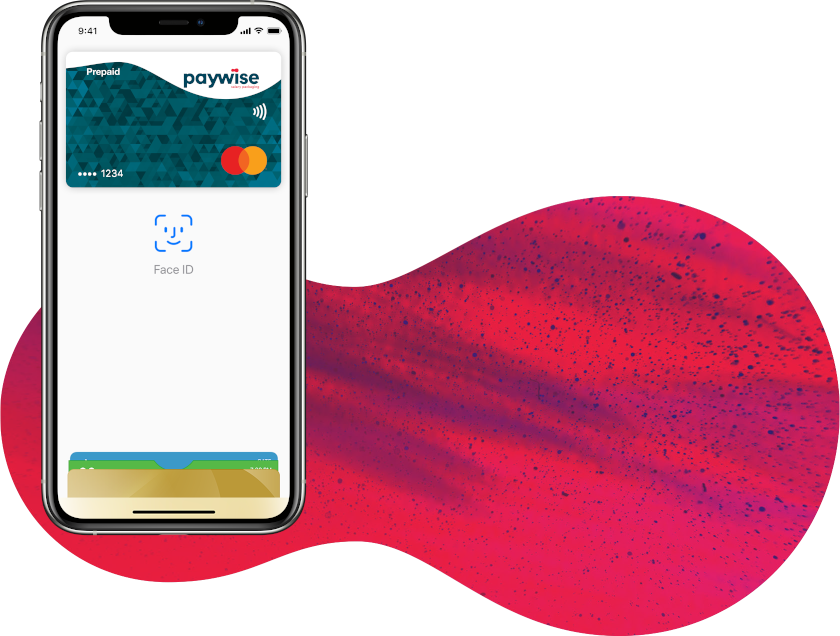 The easier and safer way to Pay.

Enjoy all the benefits of the Paywise Mastercard® with Apple Pay.

Using Apple Pay is simple, and it works with the devices you use every day. Get set up in an instant today with Paywise Salary Packaging.

Security and privacy is at the core of Apple Pay.
When you use a prepaid card with Apple Pay,
the actual card numbers are not stored on the
device, nor on Apple servers. Instead, a unique
Device Account Number is assigned, encrypted
and securely stored in the Secure Element on
your device. Each transaction is authorised with
a one-time unique dynamic security code.

Using Apple Pay is the easy, safe way to pay
instore, in apps and online with your iPhone,
Apple Watch, iPad and Mac. You can quickly
check out using the devices you carry every day.
Apple Pay is also the safer and faster way to pay
online and in apps because you no longer have to
create an account or fill out lengthy forms.

Add your Paywise Mastercard®
to Apple Pay.
Setup is easy.

Adding your Paywise Mastercard®
to Apple Pay is simple.

Here’s how to get started.

Your card has now been added to
Apple Wallet and you’re ready to
Tap and Pay easily and securely
with Apple Pay.

Get your Paywise Mastercard®
set up on
Apple Watch

Where can I use Apple Pay?

Which cards are eligible for Apple Pay?

Currently, only the Paywise Meal Entertainment and Living Expenses Card is available on Apple Pay.

What is my Device Account Number, and where can I find it?

All cards stored in Apple Pay are allocated a Device Account Number. This unique number ensures your payment information isn’t stored on your device or shared with the merchant when making a payment. You can find your Device Account Number by opening the Wallet app, selecting your card and tapping the (i) symbol in the bottom righter corner.

Where can I find out more information about Apple Pay?

To find out more information on how to make secure payments and set up Apple Pay with your Card, please visit our Apple Pay webpage or https://www.apple.com/au/apple-pay/.

What Apple devices are compatible with Apple Pay?

Apple Pay works with iPhone 6 and later in stores, apps, and websites in Safari; with Apple Watch in stores and apps (requires iPhone 6 or later); with iPad Pro, iPad (5th generation), iPad Air 2, and iPad mini 3 and later in apps and websites in Safari; and with Mac (2012 or later) in Safari with an Apple Pay-enabled iPhone or Apple Watch. For a list of compatible Apple Pay devices, see https://support.apple.com/en-au/HT208531.

Apple Pay
How To Videos